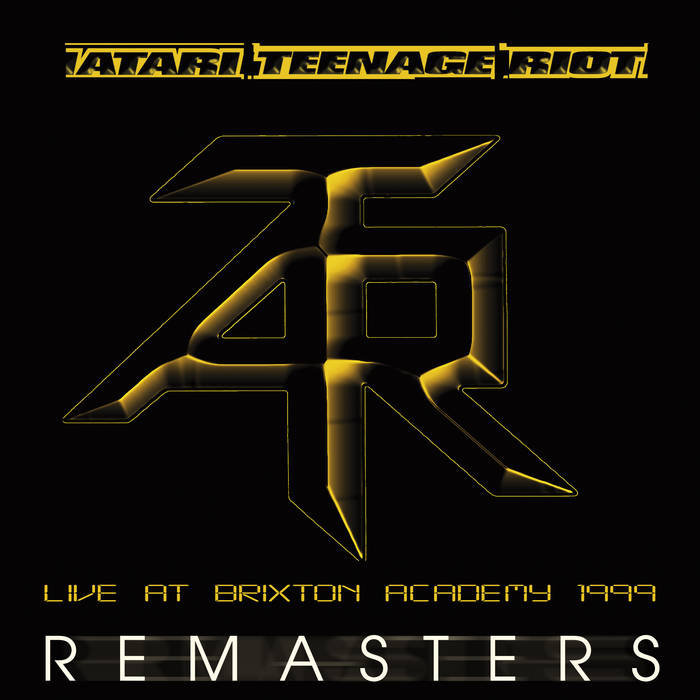 Fabian Basker The only release I've ever known to get an 11/10. Noise is important.

In late 1999 Atari Teenage Riot played a show together with Nine Inch Nails in London, UK. It is to this day the loudest pure noise show ever played to the biggest audience. Music critics gave it 11 out of 10 star reviews, many fans were outraged (because not a single song was played through out the concert), the rest enjoed the biggest "Fuck You" to the world and the music industry. After this show the band would disappear for ten years. Check out great exclusive Solipsistic Nation podcast interview with Alec Empire solipsisticnation.com?p=622 about the now legendary show.

check out the original liner notes of the vinyl album:

On the 29th of November 1999, Atari Teenage Riot played the last concert of their yearlong Revolution Action World Tour at the Brixton Academy in London.
Though the band members had become physical wrecks from the endless touring, studio recording sessions and drugs, they decided to extend the European tour and agreed to the concert request by the American band, Nine Inch Nails.

Alec Empire:"...Crack had just tracked us down somehwere in Spain. he was going through a lot of hassle 'cause during takeoff he'd tried to get off a plane through the emergency exit. The police were called in...he'd been psychotic since the concerts in Japan...
They were saying he even "threatened" a stewardess who'd tried to pull him away from the emergency exit...
so he couldn't come along on the first leg of the European tour....the endless legal bullshit...they even wanted to have him committed.
For almost a week we didn't know where he was. And the media reported it every chance they got..
I mean they just write whatever they want to anyway...though otherwise I'd only seen that from the contents of our answers...but this time round it wasn't about manipulating an opinion...
For weeks I'd been on painkillers, just about everything, mostly codeine...drugs ain't my thing...I was getting worse and worse...
there were shows where I had a hard job just staying on my feet...but I though I was able to cover it up somehow.
During the final concerts all Hanin could do was puke on stage...as fas as she could she struggled on...
she doubled for me when I'd reached my limits, and I did it for her...Nic Endo delivered her most aggressive noise attacks since she'd joined the band. And everyday all we talked about was stopping.
The stations began to add their own comments to the interviews they were broadcasting, saying that the station was distancing itsel from the the following interview and that it in no way reflected the opinion of the station, on and on...
I reached the point where I didn't give a fuck whether they sued me or not...I mean they are all just assholes you know...
Hanin had been spitting blood...and while we were having a meeting in our hotel room in London to discuss the situation, the first reports from the riots in Seattle and London came on the television...It was deadly serious, it couldn't go on any further...
She wasn't able to get up on stage anymore. Already at the start of the tour the doctors had forbidden us to perform.
But when the call came through we had to make a decision, and despite everything we all decided to go for it - a pure noise show, without Hanin, and we'd start it right at the point where we'd normally end an Atari Teenage Riot concert.
When we were finally standing in front of a sold out-out crowd of 8,000 people, Nic and I felt like we were in a bubble, a capsule, cut off from everything around us. She whispered to me that she felt angry and powerless at the same time. I wasn't able to take the audience for what they were anymore - they'd become like a kind of hostile atmosphere...if at all.
Carl created a freestyle through the vocoder that distorted every human dynamic into a flanging robot voice: Our attack had begun...
That was the end of the tour, and our end to the millenium, the decade, the 1990s or whatever it was...
I still believe everyone's opinion of the concert was divided...on our way to the tai afterwards a few kids threw their ripped up ATR t-shirts down on the ground in front of us...others jsut couldn't get enough of it...a lot of them hated us..."

To this day nobody has proven there's ever been a comparable Noise concert of that scale in the history of music.

“Atari Teenage Riot ...the most radical and dark side of digital culture ...“

ATR is a collective of musicians who program their music on an Atari 1040ST computer from the 80ties.

Their music is always political, based on the poem "Riotsounds Produce Riots" by William S. Burroughs. ... more

Bandcamp Daily  your guide to the world of Bandcamp